Space was the theme of the ninth Pullip and Dal Doll Lovers Event, which took place in Elk Grove Village, Illinois on June 4. All 120 guest table spots were sold in advance, and attendees agreed it was the best PUDDLE ever.

The weekend fun got underway on Friday, with a trip to Mitsuwa Japanese Mall for dinner followed by socializing in the lobby over tea and sweets. New this year was a “papered doll” event, where creative people were invited to dress their dolls from Groove in a fashion made of paper.

Saturday events included an icebreaker designed to get people mingling. Each person who completed the icebreaker received a free raffle ticket. Tickets were also sold for the fabulous array of donated raffle prizes. A portion of PUDDLE raffle sales is always given to charity, and $201 was raised for this year’s charity organization, the Chicago Bird Collision Monitors.

The group photo was a challenge this year, with so many attendees. A doll design event randomly grouped attendees and invited them to design a new doll for Groove Inc. After the design event, everyone got to choose a door prize.

The theme of Space really inspired fans to create great entries for the six event-day contests. The Dress Like Your Doll costume parade and contest was won by Megan Gallagher. She and her doll dressed as astronaut Sally Ride in jumpsuits that Megan made. Tammi Johnson and her Pullip Princess Ann won second prize in their vintage fit and flare record print dresses made by Tammi, and Rachael Kuddle won third. Rachael and her doll were dressed as Mako and Ryuko Matoi from Kill la Kill. Fan favorite Nicole Feldman and her Pullip were dressed as Ruby Rose from the animated web series RWBY.

Groove introduced the Make It Own kit a few years ago, and the availability of blank dolls caused the number of entries in the full customization contest to skyrocket this year. There were many fabulous customs. Other contests included a modified doll contest, a mini doll contest, an original outfit contest, and Best in Theme.

After PUDDLE officially ended, dozens of attendees had dinner in the hotel restaurant and then continued the fun in the hotel lobby until the wee hours.

Each year PUDDLE includes an online photo/art contest that takes place in advance. The contest is open to anyone in the world and gives people who can’t attend PUDDLE the opportunity to participate. Half of the six judged winners this year were from outside the United States. In the photo category, the winners were Kat’s Row (first), Marsian (second), and EternallyRose (third). EvilCupcake took first in the art category, followed by Libby Lietke (second) and applecandy (third). 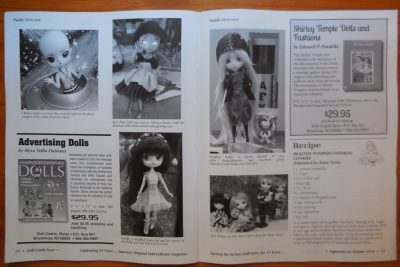